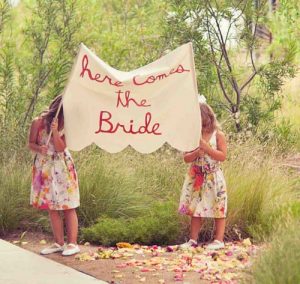 Wedding processionals can be confusing – who walks down the aisle when, and with whom? That alone is reason enough to schedule a rehearsal, especially if you have a large wedding party. The good news is that the order in which your party walks down the aisle is truly up to you. But if you lean toward the traditional, let’s take a look at how it would typically go.

Before the wedding party walks down the aisle, the guests are ushered to their seats. Although the bride’s family traditionally sits on the left and groom’s on the right, many modern couples prefer mixed seating, supporting the idea that they are all one family now. In a civil ceremony, you and your Justice of the Peace can decide how your bridal party should walk down the aisle and nobody ought to object. Some JPs like to manage the processional (or insist on it); others are happy to let the venue’s staff or wedding planner do it.

Although you can structure your wedding processional in whatever way feels meaningful you, here’s how a traditional processional unfolds.

Once they reach the ceremony space, the father often kisses his daughter’s cheek and shakes the groom’s hand in a gesture representing the ‘giving away’ of his daughter to the groom. The groom then takes his place to the right of the bride. Incidentally, legend has it that in the beginning, the groom stood to the right so that he could quickly draw his sword to fight off any suitors who might try to steal the bride before he could marry her.

The above processional order is not written in stone, and it’s often quite altered for different religious or cultural traditions. Here are just a few examples.

For example, Jewish processionals start with grandparents walking down the aisle, first the bride’s and then the groom’s. The groomsmen follow, and then the best man, followed by the groom, who has his father on his right, mother on his left. Next come the bridesmaids and maid of honor. The ring bearer and flower girl are next, and finally the bride walks between her parents, her father on her right, and mother on her left.

In some Indian weddings, the processional begins with the Baraat, where there is singing and dancing in the streets on the way to the ceremony site. In this processional, the groom, riding a white horse, is accompanied by family, friends, and groomsmen. The modern groom may choose to substitute a car for the horse. Once he arrives at the site, female relatives of the bride greet the groom and his family before entering the space. The mother of the bride applies tilak, a sacred red substance mixed with water, to the groom’s forehead to ward off evil spirits. Then, she performs aarti, a ritual involving candles dipped in purified butter, and sings hymns to ask for God’s blessings. The groom then proceeds to meet the bride’s male relatives for the milna ceremony, an exchange of flower garlands, and sometimes cash, symbolizing the bond between the two families. The bride meets the groom during the varmala ceremony where they exchange garlands of flowers to symbolize their union. This is the last act before the actual wedding ceremony.

If you are unsure, or would like something a little more unique, let your JP help you. Each wedding is filled with details that make it your own, including the processional.

Cindy Dumont is a Justice of the Peace in North Hampton, New Hampshire.