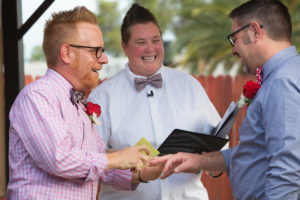 I love surprises, don’t you? As a Justice of the Peace, I’m constantly surprised by some of the unique locations couple choose, unusual requests, last minute elopements. Recently, I’ve had more than a few true, surprise weddings.

I was asked to officiate a surprise wedding last fall where the couple was throwing an engagement party for their family and friends. Instead, surprise, it was really their wedding in disguise. I was asked to pretend to be the aunt of a friend of theirs so the Mother of the Groom wouldn’t get suspicious! The couple had just returned from a cross-country trip and had set up a viewing of their gorgeous photographs. It showed their travels, the beautiful scenery, pictures of their dog. Then, the photos took a more personal note. There were shots of the couple, and a lovely picture of him “taking a knee” to propose. The last photo was of them holding a sign that read, “WELCOME TO OUR WEDDING!” This where I stood up and confessed I wasn’t the aunt. I was the JP!

They didn’t want their families to spend huge amounts of money, or stress and fuss over a fancy wedding.

In truth, I saw the wishes of this couple quite clearly. They didn’t want their families to spend huge amounts of money, or stress and fuss over a fancy wedding. They simply wanted to be married with all of them there. It was lovely, really.

I officiated a “wedding” where the couple had already been married for five years, to the shock of their guests. Surprise! I also did a wedding where, the bride’s divorce hadn’t been recognized by the state, and their original wedding (fifteen years ago!), wasn’t legal. Surprise!

I was contacted by the groom. He wanted to do this terribly romantic thing and surprise his fiancée. The whole family was vacationing, and I was to show up at their vacation venue, and… You guessed it. Surprise!

Now, surprising your guests is one thing. Surprising the bride? I was naturally concerned. I did explain to the groom that at some point he had to confess to her what was happening. After all, she did need to sign the marriage license, right? He said he had that all figured out. Our state has a ninety-day deadline on marriage licenses. He’d just bring her to the town office and tell her now they had three months to plan something. Nope. Less than three days later, there I was.

Now, surprising your guests is one thing. Surprising the bride? I was naturally concerned.

I arrived in my traditional black suit into a crowd of thirty to forty people. Kids playing, folks relaxing, grilling hot dogs, playing horseshoes and corn hole. Somehow, I find my nervous groom. The bride still didn’t know that in less than thirty minutes, she was going to be his wife. His plan had worked. She had signed the license, no questions asked. She was happily on vacation. All I could think was this could all end terribly bad!

The groom called out to his unsuspecting, soon-to-be bride and waved her over. She’s wearing shorts and a cute tank top with flipflops on her feet. She gives me a curious look. (Black suit, remember?) And then he introduces me. “Honey, I want you to meet Lisa, she’s a Justice of the Peace. She’s here to marry us. Today. Right now. Surprise!”

I braced myself for the worst. The bride just blinked. Looked at him. Looked at me. Looked down at her clothing and back to him. With the lift of one shoulder, she smiled a brilliant smile and said, “Okay.”

The groom announced it to the other guests. They stopped cooking hotdogs, rearranged their chairs, gathered the children and stopped the corn hole game, and a few minutes later cheered as I pronounced this surprising couple, husband and wife.

Lisa Olech is a justice of the peace in New Hampshire.  As a published romance author, she loves to personalize couples’ ceremonies and write the next chapter of their love story. See Lisa’s profile on findaJP.com, along with other romantic JPs!