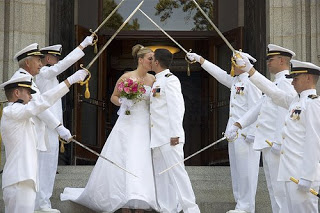 During this month when we commemorate Veteran’s Day, I thought I’d look at the ways we can bring military customs into the wedding ceremonies of men and women who serve our country. If you are an active service member planning a wedding, or if you know someone who is, consider these time-honored rituals for a unique and inspiring wedding.

Many Justices of the Peace offer discounted or free wedding ceremonies to those in active service. Search the pages for JPs in your area at www.findajp.com. Ask if there is a discount for active duty service members. You may be surprised to see how delighted officiants will be to honor you with their service.

Cindy Dumont is a Justice of the Peace in North Hampton, New Hampshire.