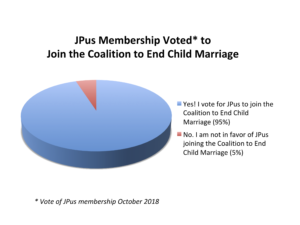 In October 2018 the JPus membership voted overwhelmingly (95%) to join The Coalition to End Child Marriage in the United States.

The Coalition to End Child Marriage brings together organizations and individuals working to end all marriages of children younger than 18 in the United States. Child marriage destroys girls’ health, education and economic opportunities. It also increases their risk of experiencing violence. Therefore, it is at odds with the JPus Code of Ethics that requires officiants to act in the best interest of their clients. Members considered how they would respond if they were asked to officiate a child marriage. In response, many voiced opposition to child marriages. They said that they would not feel comfortable performing them and would likely refuse to do so.

The problem of child marriage is real.

It is happening in the United States. Between 2000 and 2010*, about 248,000 children as young as 12 were married in the U.S. States are beginning to recognize the real harm inflicted. Finally, laws are beginning to change. This March 2018 article in USA Today tells the story of Sherry Johnson. She was forced to marry her rapist when she was 11 years old; her story was the impetus behind Florida’s legislation.

The Coalition will pursue federal legislation and various other approaches. Goals include: