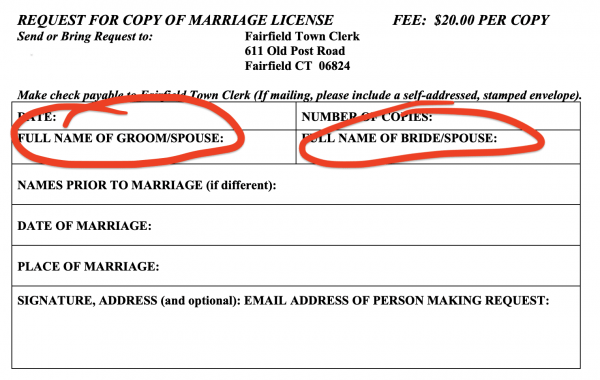 All of the New England states that JPus is active in use gender-neutral terms on marriage licenses. However, this wasn’t always the case.

We were pleased to learn that in 2019 Maine started using gender-neutral terms when referring to marriage or familial relationships. This prompted JPus to conduct a quick survey of the other states that we serve, asking what terminology was used.

Connecticut’s use of bride and groom meant that for a lesbian couple, one of the parties would have their name next to groom/spouse, and a marriage between two men would list one of them as bride/spouse. Similarly, for queer or non-binary couples the labeling would not be appropriate. In November 2019 JPus wrote to the state’s Registrar asking that Connecticut modify its terminology to better reflect gay, lesbian and non-binary couples.

Connecticut State Registrar, Elizabeth Frugale, responded that she agreed that the language was problematic. Accordingly, her office pursued a change. During the 2020 legislative session, only COVID-focused bills were prioritized. In 2021, JPus engaged State Representative Cristin McCarthy-Vahey to help us advocate on the matter. At JPus’ 2021 conference, Rep McCarthy-Vahey told attendees about her conversation with Registrar Frugale. Shortly thereafter, the Secretary of State’s office submitted Public Act 21-26 with language to modify the marriage license. The public act, SB1083, passed both the House and Senate during the long session. Finally, on June 7, 2021, Governor Lamont signed the bill into law.

Now, in Connecticut, the terms Spouse One and Spouse Two are used on the marriage license application (effective July 1, 2021.) Marriage certificates that are issued after January 1, 2022 will also reflect the changes.

The specific language of the Connecticut bill removed the terms “bride” and “groom” and replaced them with “spouse 1” and “spouse 2”. The bill also removes any reference to a spouse’s race or ethnicity – another area that JPus advocated for!

Sec. 7. (NEW) (Effective July 1, 2021) On or before January 1, 2022, the Commissioner of Public Health shall revise the application for a marriage license made under section 46b-25 of the general statutes and any marriage certificate issued on or after January 1, 2022, under section 7-51a of the general statutes to eliminate (1) the references to “bride” and “groom” and replace such references with “spouse one” and “spouse two”, and (2) any reference to the race or ethnicity of a spouse and any race or ethnicity designation of a spouse.

JPus has recently expanded into the state of Florida. Hence, we will be addressing the gender-specific terminology used on its marriage licenses. Stay tuned.