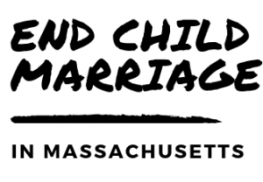 Shockingly, there is no minimum age to marry in the state of Massachusetts. The Justice of the Peace Association is working to change the law and make 18 the minimum age to wed.

How you can help

Senator Chandler and Rep. Khan re-filed bills to end child marriage in Massachusetts: H1709 and S937. Of course, JPus submitted testimony in support of the legislation at the November 16, 2021 hearing before the Joint Committee of the Judiciary. The bill passed the House unanimously and now awaits a vote in the Senate. Please tell the legislators that you support the bill.

JPus proudly signed on as a supporter of Massachusetts’ S2294 (formerly HB1478/S24), An Act to End Child Marriage. These bills were introduced in parallel by Representative Kay Khan and Senator Harriette L. Chandler. Either would have banned all marriages of anyone younger than 18 years – no exceptions.

On March 26, 2019 there was a hearing on the senate bill before the Joint Committee on Children, Families and Persons with Disabilities. It passed out of committee on July 18, 2019 and the full Senate voted unanimously in favor on July 25, 2019. Despite this, the House didn’t pass the bill.

In 2019, H.1478, Rep. Khan’s legislation to end child marriage in MA was placed into a study order. Meaning, it died in the Judiciary Committee.

In 2017 Representative Khan submitted a bill (H2310) to end child marriage. The bill didn’t pass, even though there were 15 cosponsors and a hearing scheduled.

JPus has submitted testimony at every stage of the legislative sessions to support efforts to end child marriage in the state.